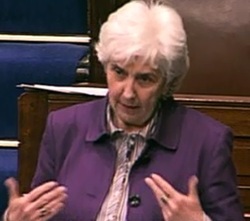 Click to hear Maureen's speech in full
Gabhaim buíochas don Teachta Tom Fleming as ucht an obair a dhein sé ar an ghnó Comhaltaí Príobháideacha seo atá á phlé againn. I will begin with a personal story. Some years ago a young male relative of mine contracted a viral infection when working abroad. The hospital where he was treated identified that he would need a heart transplant at some stage. He came back to Ireland and over the next year or so his physical deterioration was visible. During that time he received various treatments, medication and procedures in the cardiac section of the Mater hospital. Eventually, he had to be taken into hospital because it was identified that he needed a heart transplant. He was connected to machines to keep him alive. When visiting him in hospital during those weeks the care and dedication of the team was obvious. We were also aware that in order for him to get a heart it would mean another person losing his or her life. While hoping for life for him we were also conscious of the implications of that.


I spent a couple of weeks visiting him and then I remember getting a call one afternoon from his mother to say that a heart had become available and she asked me to stay with them while they were waiting. I went straight to the hospital. I clearly recall the emotion and tension during the wait while tests were carried out on the heart and various other procedures to see whether it would be a match. Once the word came that it was a match I can remember the rush to get him into the operating theatre. It was about 11 p.m. and we thought we would be there all night but the operation was relatively short and after a couple of hours the surgeon same in to say it had been successful. I would love to say that the story had a happy ending, it did not but he did get about three or four years with the new heart, which gave him a great life, one that he did not have for the previous couple of years when his health was deteriorating. Unfortunately, he passed away in spite of getting a new heart.


Being in that situation made me realise the importance of organ donation. I had always carried a card but that experience brought it home to me how vital it is that we are aware of the need for organ donors. I am conscious of the other lives that might have been saved if more people carried organ donor cards or if families or next of kin knew the wish of their loved ones to donate organs in the event of the situation arising. As the motion states, it is important to emphasise the incredible generosity of families who give consent for donation because it is at a time of great stress and great loss for them.


The motion refers to the Spanish and Croatian experience where there is a cost saving. Apart from the moral and ethical reasons, there is also an economic one. In Croatia, organ donation structures resulted in increased donation rates to 30 per million of the population compared with 18 per million of the population in this country. What is significant in Croatia is the network of hospital physicians responsible for organ donation within intensive care units and also that the legislation there was adjusted to include the opt-out in keeping with Spain, Belgium, Austria and Portugal. The countries that have made serious efforts on organ donation and transplants have seen major benefits, both medical and financial.


This country did have one of the highest rates of donation but, unfortunately, it has fallen. It is interesting to note that in 2010 there was a record low of 58 donations, in 2011 there was a record high and in 2012 the figures were below average at 17% less than the previous year. The first step is to introduce legislation as that is a major way forward. Another step is to intensify a public awareness campaign to address the need for donors. One aspect of that is the opt-in system for organ donation. If a person decides not to be part of the system, he or she can sign out of the automatic donor scheme. Those who do not wish to donate have an opt-out, otherwise they are presumed to have opted in.


According to Mark Murphy of the Irish Kidney Association, even in countries which have the opt-out clause the law still dictates that relatives have the final say and can veto any decision. Presumed consent is not always feasible in practice. If presumed consent is the way forward in this country then citizens must be informed and know as much as possible. A donor should be able to have the satisfaction of knowing that he or she will be a donor if the situation arises. A clear public campaign is needed in order for people to know what they are doing and that it is a very important civic duty. Equally, the campaign must ensure that people who opt out know the position. It must be phrased in language that can be understood by everybody, including those who have literacy issues.


Demand is outstripping supply. Organisations such as Falun Gong tell us of the growing black market for organs. That can be eliminated if we all have the same system of presumed consent. I note that a couple of years ago the Irish Medical Organisation advocated for a hard mandated choice model which takes away the burden of decision-making from the family. That would help both the family and the medical workers during times of traumatic or sudden death.


The team in the Mater hospital was excellent. I can see the need for more such teams with trained personnel to co-ordinate the donor system so that we have qualified donor co-ordinators in hospitals across the country. It is important to acknowledge the three transplant programmes we have in Beaumont Hospital, the Mater hospital and St. Vincent’s Hospital. Because of the increasing pressures on them there is a need to ensure that the work is not just confined to those three hospitals in Dublin. We know the cost effectiveness of organ donation. Treatment for people waiting for organs costs the health care system more than the organ transplant operation so investing in donor co-ordinators would be cost effective.


I read a recent article by Professor Jim Egan in The Irish Times. He also made the point about the need for an independent national organ procurement office. If we had different policies on alcohol, drugs and diet we could eliminate some of the need for organ transplants. In the article to which I referred, Professor Egan outlined that there are 685 people awaiting transplants. I know the stress of waiting for a transplant for my young cousin and I can only imagine what those families are going through now as they wait for another family to experience loss and distress so that their loved one will have a chance of life.


I will conclude by quoting Professor Egan:

Organ donation and transplantation in Ireland is at a crossroads. With both the proposed “soft opt out” legislation and infrastructure support there is an opportunity to provide enormous benefits for generations to come.