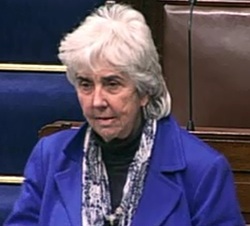 With the permission of the House, I will share my time with Deputy Thomas Pringle.

I acknowledge that Sinn Féin has used its Private Members' time tonight and tomorrow night to discuss this serious matter. We know the consequences of bullying. It is not a recent phenomenon. Bullying has been with us since time immemorial. I do not know what it is in the human psyche that gives us this inclination, or need, to hurt a fellow human being.

There are two important words in the definition of bullying. They are "repeated" and "intentional". It is important not to blur the lines between having a disagreement, a row or a falling out and what is really bullying. If someone disagrees with me, it does not mean I am being bullied. The term "bullying" is sometimes applied to situations that are not bullying, as defined. This takes from the serious nature of bullying.

I have a difficulty with the phrase that it is against someone who is not able to defend himself or herself in that situation. That is almost to facilitate bullying in certain situations if the recipient can deal with it. Perhaps there are those who appear to be able to cope, but I have absolutely no doubt bullying affects the recipient. It might not appear so immediately, but it could emerge in years to come. Repeated intentional aggression against an individual or group is wrong, regardless of how the recipient deals with it. The other point is that the behaviour of the bully must be looked at.

I acknowledge the good work being done in schools. Schools and youth organisations have put a lot of time into drawing up anti-bullying policies. Procedures have been put in place for dealing with incidents of bullying and there is an array of programmes in schools and youth clubs to make them a safer environment. I acknowledge the work of the unit in Trinity College Dublin, Kidscape in Britain which has fantastic material available, GLEN and BeLonGTo, the Big Brother and Big Sister programmes, the mentoring and buddy systems, friendship days and weeks and programmes such as On My Own Two Feet and the Cool School.

In my own school there were two principles when we looked at this issue. We valued difference and it was a telling school. If we get these concepts across in all situations, we will deal effectively with bullying. As an English teacher, we used the freedom offered by the junior certificate programme to use poetry and plays on bullying. It was a great way to get across to teenagers. There are very few schools that do not take bullying seriously and that do not do what is suggested in the Bill. Being anti-bullying is a whole school function. I have a difficulty, however, with a single member of the board of management taking full responsibility for the issue. Board of management members are volunteers who have an inordinate amount of work to do and they are taking on more and more as time passes.

Young people today do not have the language to express themselves. That is the first step in tackling bullying because they must be able to describe the feeling of being alienated and isolated.