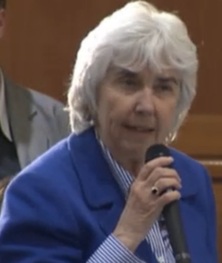 Watch contributions on YouTube link
'Over 1,000 submissions to the Constitutional Convention on the subject of same sex marriage so a lot of reading last week. One struck me particularly - from U.C.C. Law school and one of the authors was at the convention today so I was able to bring it up with him. This was to do with the fact that our Constitution, including the Preamble, are very much based on the principle of equality, respect for the dignity and freedom of each individual and that articles 41 and 42 did not preclude marriage rights for same sex couples. My question was why then has it been interpreted as meaning man and woman.  His answer was that it was politicians who do that. His view as a constitutional lawyer was that marriage between same sex couples was allowed by our constitution.
The submissions on both sides were very interesting and all delivered in a spirit of dignity and respect; as were all the comments and questions from the floor.
At times I found it emotional, particularly when the gay participants spoke very movingly of their own situation, being denied a right that heterosexual people have. Back this Sunday morning for the vote.'

I, and the other Independents from the Oireachtas - Deputy Catherine Murphy and Senators van Turnout and Mullen look forward to all of us working together in the coming year.

My feelings on this occasion are a mixture of pride and humility - in having the opportunity to be part of a Constitutional Convention, conscious of the historical significance of this work, thinking back on the 1922 Constitution of the Irish Free State and Bunreacht na hEireann in 1937.

Regardless of how we feel about our society, regardless of the criticism, we live in a country that is democratic where we , the people, choose our government and where we can contribute to the constitution.

No matter the criticism directed at this government, and there will be more in the coming week, we do have basic democratic rights, guaranteed by our constitution, rights to free speech, free association, free press, education and we do have the right to amend our constitution.

There is a great image, line in Shakespeare's King Lear when Lear cries out - 'Who is it that can tell me who I am?' I believe the question of identity is at the heart of a constitution - What sort of society do we want? How do we want to be identified?

We are living in challenging times - challenges that are economic, environmental, political, social.
In the Dáil Technical Group submission, we made the point of the need to strike the balance between those areas in need of reform while protecting those parts of the Constitution which have been a solid foundation for realising the democratic, free and sovereign state that is the Republic of Ireland.

We, and others, were disappointed by the narrow remit of the convention and the exclusion, at the moment, of areas and topics that are of vital importance in shaping the type of society in which we want to live - topics like economic, social and cultural rights, housing and health being of particular public concern, rights and conditions of prisoners in both the Republic and Northern Ireland, the rights of people with disabilities, physical and mental.
Ireland is a strong and reputable voice on human rights in the developing world, in respect of the Millennium Development Goals, women, land, property, education.

We now have a seat on the U.N. Human Rights Council. We hope the area of human rights will be considered after the eight enumerated topics have been discussed.

Looking at the eight topics: reducing the voting age to 17 and yet there is no direct representation of that age group here today so the Convention is missing the voice of one quarter of the population - those under 18.

We will look at giving citizens outside the state the right to vote in Presidential elections at Irish embassies; yet we do not have one representative from the Irish Diaspora.

The Presidential term of office will be discussed but I hope the convention will have the space to look at other aspects - like the nomination process, the minimum age to be eligible election as President.

We will review the Dáil electoral system which is a massive topic, including looking at increasing the participation of women in politics. Can we look at Dáil reform without also looking at local government reform.

Also, there is a role for civil society and a need to hear their voice.
But especially the voice of the citizens of this country has to be heard because we need the public to be engaged with this process: there is no doubt there is a disaffection, a disconnect with and disinterest in the political system and a lack of trust in public representation; we see that in low voter turnout.

There has to be public ownership of the process and ways found to engage a greater public participation.

When a number of us spoke in the Dáil we had concerns over the composition of the convention, that politicians would not have an undue bearing on the deliberations. We wanted that the balance would be weighted more in favour of citizens. I think great effort has been made to ensure a balance in gender, socio-economic background, urban-rural, employed/unemployed - to ensure widest possible representation.

I hope the members of the Oireachtas also reflect that.
There were concerns regarding the chairperson before the appointment and I want to acknowledge the chairperson for his work and voice on human rights for many years.

Transparency and Accountability are two terms with which we are familiar. This convention also has to be transparent and accountable. It must ensure a process that allows meaningful, informed discussion of the topics and opportunities for organisations and civil society, the public to express their opinions. and all of this done openly and publicly.

Uaireanta, bainfaimid úsáid as an seanfhocal - 'Ní neart go chur le chéile' agus ceapaim go bhfuil sé oiriúnach chun chríochnaigh leis anois.
It is by working together that the Convention can succeed in the work that is ahead.'