Question 110: To ask the Minister for Finance his views on the fact that the currently used translation of the Soldiers Song by Peadar Kearney has explicit party political connotations; and if he will make a statement on the matter. [9875/11]

In response to the Deputy’s question, my Department holds the copyright in the National Anthem. The principal reasons for holding the copyright are to ensure that it is freely available, to prescribe that performance fees are not to be charged or collected in respect of the use of the National Anthem, and to ensure that it is not used in an inappropriate context and without due deference, such as to render it an object of scorn or derision.

Statutory Instrument No. 158 of 1995 European Communities (Term of Protection of Copyright) Regulations provided for the extension of the term of protection of literary, dramatic and artistic works to the lifetime of the author and a period of 70 years after the author’s death irrespective of the date when the work is published or otherwise lawfully made available to the public’’. As Peadar Kearney’s death took place in November 1942 copyright on the national anthem will expire in December 2012.

The state does not hold copyright in respect of the various Irish language translations that have been made since 1917. I am however satisfied that the current version of the National Anthem as published on the Department of the Taoiseach’s website is the appropriate and correct interpretation of the words as composed by Peadar Kearney. 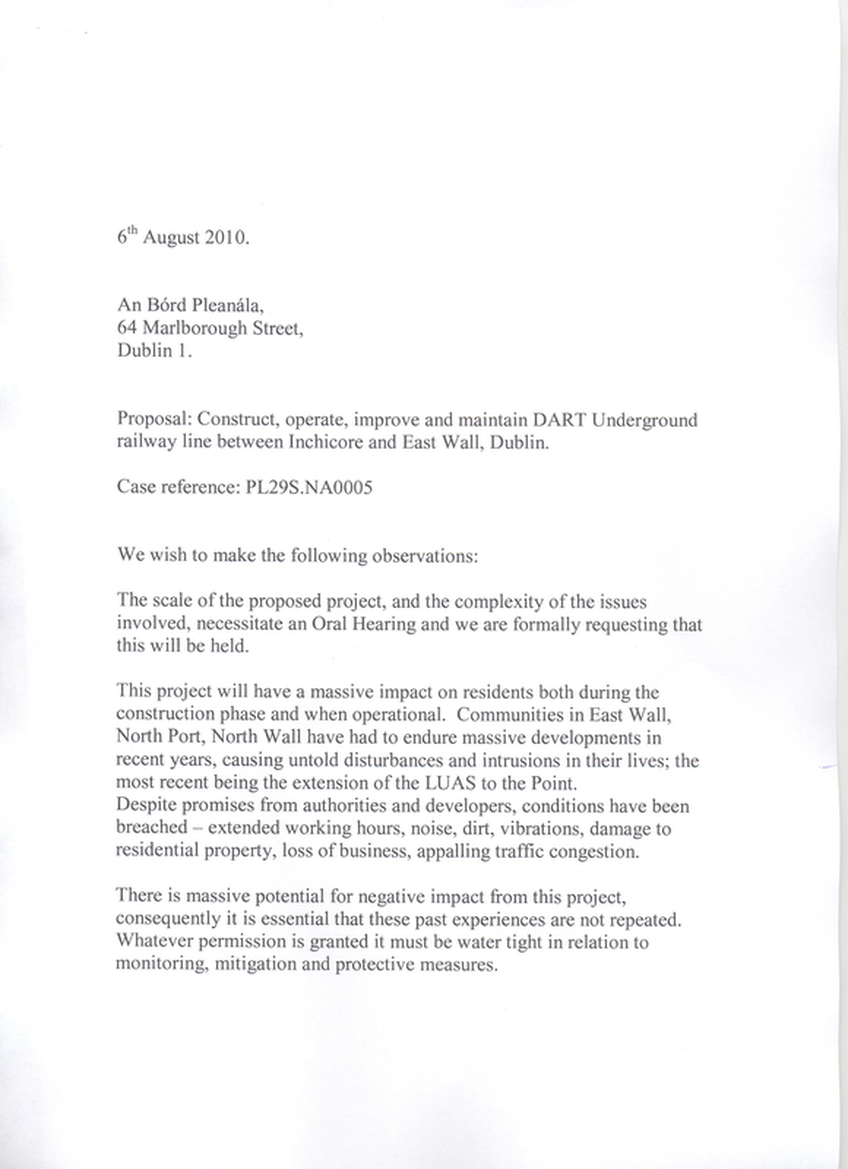 There are certain aspects we would like to highlight as being welcoming:
the extent of the public consultation;
the dispersal of the student accommodation;
the extent of green areas (even though it means increased number of high rise buildings);
the range of health services through H.S.E., including the medical facility and intensive care facility;
access for the community to the green space, the library and the sports facilities;
the architectural and historic significance of the area and buildings is recognised.

We have some areas of concern, mainly due to the projected population of some 27,000 on the campus:
Quality of life of the residents who are most impacted on because of the extent of this development, particularly in the areas of trafficmanagement and housing.
There must be a significant traffic management plan which will be constantly reviewed.

Regarding housing, a potential effect is the increase in flatland.The new occupiers cannot be allowed encroach on the lives of the residents.  There is a significant older population in the Rathdown Road area.  Therefore, we are calling on the D.I.T. authorities to take the initiative here by agreeing to set up a student contract on code of behaviour with appropriate action to be taken in the event of breaches.
We call on the G.D.A. to appoint a designated Community Liaison Person who will work, closely and in a meaningful way,  with the communities most affected by the development.

We welcome the fact that there is a new L.A.P. and request that the plan for the Smithfield/Stoneybatter area be in the first tranche.


Finally, we would like to acknowledge the role of our predecessor the late Tony Gregory who spoke out so forcibly both in the Dáil and in the community on the issue.  He made a very strong case for the inclusion of a resident from the local community organisations to be in the agency, calling for a truly representative consultative body and not just a ‘talking shop’.  We agree that in any area of major development it should be a basic right of the people who live there to be represented on the agency overseeing the renewal of the area and be actively involved and listened to in the drawing up of strategic plans.
He particularly pursued the provision of a site for the Dublin 7 Educate Together school and the provision of recreational facilities which can be shared with the local residents. We welcome that has been done.

We welcome the fact that the new plan is focusing on Dublin’s identity and that it is acknowledging Dublin’s identity is intrinsically linked with the people. The city must maintain the highest standards of governance, proper planning and the interests of the citizens who live in the city.

We wish to make the following observations on the Draft Dublin City Development Plan 2011 – 2017.
It is vital that traditional communities are respected and listened to. They have been the force in maintaining identity, creating urban villages. Any development needs to be stitched in carefully, taking account of distinct identity, traditions and place-making within these character areas.
There must be a definite commitment to preserving and enhancing our history and our architectural milieu, making special mention of Mountjoy Square and environs, the battlefield site of the Easter Rising, recent Viking finds. Best architectural practice must prevail and be incorporated.


We wish to see an acceptance of market trade, so often described as ‘the heart and soul of Dublin’, as being intrinsic to the character of Dublin. It must be structured, regulated, with an agreed plan between the traders and the authorities.
As there is no Capital funding for new buildings in the foreseeable future, there must be a clear strategy on how housing needs are going to be met. Voids must be urgently and speedily moved on and occupied. We seek a commitment, over the life time of this plan, to Precinct Improvement Plans and Capital Works Schemes.

We have concerns regarding Density in Dublin’s Inner City (within the bounds of the rivers Dodder and Tolka). Greater guidance needs to be given to incorporate different design topologies in the Development Plan. D.C.C. measurements are a crude measure of density and could potentially lead to poor design and poor place-making. We stress place-

making, the need for different mixes of units, maximising own door units, quality public realms, open spaces and amenities. Any development of over 200 units must have a community audit. We must maximise the ability of citizens to stay within the type of housing they wish.


Amenity lands must be preserved as part of the green infrastructure. We must retain existing zoning of amenity lands. There can be no re-zoning of green space.
Dublin is a low-rise city. This is linked to its identity and character. We want a commitment that low-rise means 2-3 storey (with occasional basement), mid-rise means 4 – 6 storey. It is vital that all development takes what is around into account and provides benefits in terms of amenities.
We want a strong commitment that Development Plans are not solely profit driven as they have been in the past.
We welcome cycle lanes but not at the expense of residents’ needs in areas being considered for cycle lanes. Regulations regarding rules for cyclists must be enforced and the integrity of the footpaths respected. Cycle parks are needed.


In relation to Transport, there must be forward planning and joined-up thinking. We have grave concerns that after the expense, work, disruption there are areas where the Luas line will be dug up to incorporate the Inter-connector.
Streetscapes, like Ballybough Road, which is a commuter route into the city needs enhancement and a commitment to improving the buildings which have fallen into disrepair and not inhabited.

We call on D.C.C. to ensure that venues like Croke Park and 02 work with the communities to ensure cleaning after the events and that there is meaningful consultation with communities affected by the events in these venues, including real community gain.


There must be an acceptance that amenities like swimming pools are not money making ventures but a necessary sporting facility for communites.
We are asking that a commitment be made to considering further allocation of areas for allotments and to consider using derelict sites for this purpose.