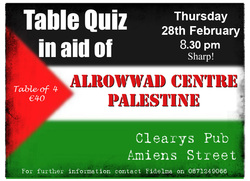 Click for info on Alrowad Centre
In aid of  the community cultural centre
Alrowwad,
Palestine

Get your team along!

Maureen attended  the Citywide Tackling Intimidation seminar, Thursday 19th May in The Tony Gregory Youth & Community Centre in Ballybough. Here she is in deep conversation with Mel Tomás MacGiobúin

Week beginning 08 August
What a superb performance from the Dubs. It was great to be at such a sporting match & even the rain cleared away at Croke Park.

This coming week I will be mainly in the office in the Dáil - following up on correspondence, letters, with calls to pursue, reports to read and I am still clearing the desk.
Filing is very much on the agenda also.
Call for the protection & preservation of Moore Street as a historical site
In her first Dáil Priority Question, on the issue of Commemorative  Events and the government's commitment to marking the centerary of the Easter Rising of 1916, Maureen asked the Minister for Tourism; Culture and Sport  that the historical site from the GPO on O'Connell Street to Moore Street should be protected and preserved as requested by the Save16 Moore Street Committee . See the full details here
Over €500 million for fee-paying post-primary schools over the last 5 years.
On Tuesday 10 May, I received answer to question on exchequer funding to fee-paying post-primary schools and Dormant Accounts funding support for DEIS post-primary schools with students from disadvantaged areas over last 5 years. The answers seem to speak out for themselves.The question and the full figures are here
Maureen makes a stong statement on the state of the nation's finances12 May 2011:
In today's debate in the Dáil Maureen made a very strong statement about the dire straights the country in is as a result of mismanaged economics. You can read what I said on this link
Jobs Initiative 2011: Statements (Resumed) (11 May 2011)
Is it swansong for national anthem when copyright dies? Maureen questions  what happens when the copyright expires?Our National Anthem, Amhrán na bhFiann, is under threat as the copyright is due to end next year. Maureen has raised the issue with the Minister for Finance Michael Noonan and you can read her questions here.

There was a full exchange in the Dáil between Maureen and the Minister, where she called for a change to the famous opening line of the chorus of Amhrán na bhFiann, by replacing the reference to “Fianna Fáil” (soldiers) with “laochra fáil” (warriors). “This would restore the integrity of the original words and stop it sounding like a party political broadcast,” she said.You can read a full account as follows 5 May 2011    The Irish Times    PAUL CULLEN Political Staff
Maureen speaks on mortgage holders crisis
Maureen spoke on the crisis faced by many mortgage holders in the country faced wil loss of employment and rising rates 'There are many groups of people hurting in this country. One such group consists of mortgage holders who bought property in our so-called Celtic tiger years.' she said.

Whatever are they doing? 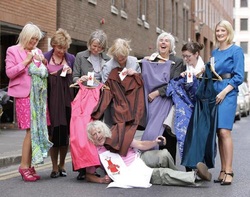 Whatever are Maureen and her colleagues up to? Read all about on her Blog Page