This page is an archive of the three week election campaign carried out by Maureen and her supporters. 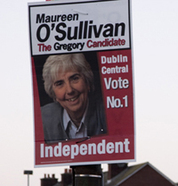 1 February 2011.
The campaign began in earnest is some of the worst winds and rain seen in a long time in the city of Dublin. So bad were the winds that flying political posters became a topic for news reporting as motorists reported a certain satisfaction at finally being able to legitimately run over some politicians!  Happily Maureen's poster on the Ballybough Bridge survived the storm

On a more serious note Maureen was out on the `Friday 4 February to support the CityWide group, outside Leinster House,in their campaign to make the tackling of the Drug Crisis a political priority. Fighting the drugs problem in her constituency has been an issue close to Maureen's heart when she worked in her community, long before her election to the Dail last year. She chaired the North Inner Drugs Task Forcefor almost five years and also chaired the North Inner City Development Group, which was directly responsible for funding many actions designed to keep the young people of the area drug-free.

She also had an input into the LIveline radio show where she reminded the presenter that she won the by-election due to the death of Tony Gregory, the longest serving Independent TD in the history of the state.

7 February Comment from Maureen after Week 1 of the campaign

We completed week one of the campaign which was a leaflet drop in the constituency.  We covered a major amount of ground in the week, in spite of being wind swept and soaked by the rain on several occasions.

While we were not knocking on doors it was great to meet people wishing us well in the election. We did meet people who were angry at the political system, feeling all politicians were the same - we did our best to reassure them we were not like that.

Noel Gregory was, as usual, amazing with his knowledge of the roads, ensuring there was no over-lapping - once we did as we were told. The dark nights meant we did not continue as late as we did with the bye-election in May '09 but I do remember an election campaign with Tony when I was admiring Christmas decorations!! I think it was late November quite a while ago.
This coming week we will be knocking on doors with a more detailed leaflet.  I am listening more to the weather forecasts than the news!"