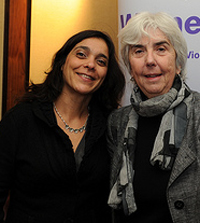 It is hard to believe the campaign is nearly over.

I am just so grateful to 'The Gregory Group' for their commitment, hard work, enthusiasm and good humour through a difficult (and wet) campaign.

I've been very conscious of that last campaign of Tony's in '07 when he pushed himself so hard; for some reason he believed his seat was in trouble.  We knew he wasn't looking the best - some months later we knew the cancer must have been starting at that stage.  There is so much respect still there for Tony and I think people who didn't realise it before now are seeing the kind of politician he was - honest, principled, hard-working and committed to social justice, fairness and equality.

Today had Nuacht with us as we canvassed the seniors in Dominick Court.

Tonight, speaking at the event in the Mater Hospital on health issues, invited by Claiming Our Future. 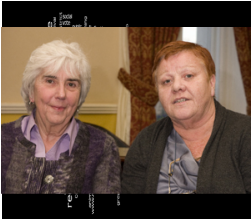 Another week over; It's been such a busy week I have not had tome to collect my thoughts!  This time next week will be the day for voting. The past week went well - great numbers of supporters and canvassers every night and at the weekend.

Monday morning was filmed for Primetime special on education - we used St. Joseph's Co-ed school in East Wall where I've been chairing the Board of Management for a number of years. Barry did a clip to go on Youtube which you can watch on this page.

More rain on Tuesday and got in to the Oral Hearing on the proposed Dart Inter-connector which, if it goes ahead, will have massive implications for East Wall, North Wall, North Port, North Strand.  Tuesday night - panel of candidates answering questions at the Dublin Adult Literacy Centre, chaired by Theo Dorgan, followed by a meeting in Cabra relating to Gaelscoil Barra - still in pre-fabs while our governments continue to pour some 100million into private education.

Wednesday morning 8 a.m. - on a panel for a breakfast meeting with City Business people; then spent rest of the day and night canvassing - more rain and a meeting with residents in Iona district. On Thursday evening  I was at a meeting in the Tony Gregory Centre, Ballybough to get an update on the situation with the Handball Alley; I had to leave early to get to canvass group for 6.30. (It seems the more we are out canvassing and calling, the more requests for help coming in so trying to keep on top of those in between the canvassing and the meetings.)


That was followed by a Meet the Candidates in East Wall Community Centre; I think there were 11 candidates there and we each got 3 minutes on why vote and then why vote for the person.  I made my contribution based not on what I was promising to do if elected but what I have done since a teengager involved in youth work in East Wall.  There were then a number of questions and each candidates' names taken out at random to answer.  Funny incident of the night when Pascal D was asked if not voting for himself who would he vote for: Answer?  Me! 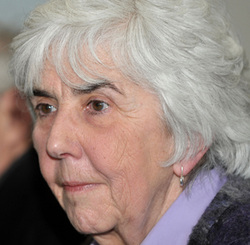 Two weeks into the campaign now - I think the longest two weeks of my life to date though I have to admit last week did move quickly.  We completed the leaflet drop in most of the constituency and Monday 7th began the canvass in earnest.  We are covering a lot of ground- Noel takes a group every night and heads to Cabra while the rest split into smaller groups.

I had a number of meetings to get to - launch of Barnardo's Manifesto; Get on Board - dealing with mental health issues for young people; then our official launch in the Teachers' Club on Thursday 10th - the Sunday World and Des Ekin gave us very fair coverage. Fergus made a very strong speech (see the article below) and I spoke; acknowledging the fantastic commitment and enthusiasm of the group, the majority of whom are involved in so many community, youth, drug, senior citizens, foreign national projects and initiatives.

I was invited to St Thomas Court Training Centre to meet people with mental disabilities whose training allowance of some 31Euro will be cut next March.  These people, being in the training centre, have a focus to their day, they are involved in a number of activities - personal development, computers, crafts. I think it immoral that life should be any more difficult for them and they have a wonderful facility there.

I spent most of Friday canvassing in the Oxmantown area and that night Marie and I attended Mass in Our Lady of Lourdes Church, Sean Mac Dermott St to celebrate 50 years of the new church.  I met up again with Frs Paul Lavelle and Paddy Byrne whom I knew well for many years through our involvement in youth work.