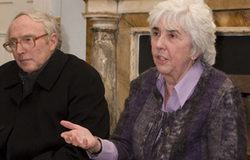 Maureen launched her official campaign in the Teacher's Club, Parnell Square with the support of a wide group of supporters and well-wishers.  Noel Gregory, brother of the late Tony Gregory was also present.

Fergus McCabe, a prominent member of the Gregory group reminded the audience that the best way to ensure that the principles and values that Tony and the Gregory Group stood for continue to be articulated in this constituency and beyond was to support the return of Maureen to the next Dail Eireann.

The question was raised as to why should people vote for Maureen?  The answer was given that people should vote for Maureen because she is an outstanding candidate with a track record of standing up for values and beliefs that are more relevant than  ever and real  achievement in relation to setting up  civic initiatives that have been of real benefit to people in the north inner city and beyond. "We are of the left and always have been pro-active in trying to build and support progressive alliances as our record shows but we try to base our policy stances on realism as well as aspiration. It has been said that politicians campaign in poetry and then govern in prose. Too many in this election have lost sight of the importance of  poetry and vision and hope but we never will.  We promise to show respect all our political opponents, to campaign on our policies, to never personalise matters and we will  happy to see  candidates who share our progressive agenda do well."

In closing the official launch ceremony,  Fergus McCabe reminded the audience of a famous speech the late Robert Kennedy delivered in Cape Town in 1965; on that occasion he said that:“ Each time a man stands up for an ideal, or acts to improve the lot of others, or strikes out against injustice, he sends forth a tiny ripple of hope, and crossing each other from a million different centres of energy and daring those ripples build a current which can sweep down the mightiest walls of oppression and resistance ... real generosity towards the future lies in giving all to the present”   Mr McCabe in conclusion said that "Maureen O’ Sullivan is a most modest and gently person  but she has stood up for  ideals, has acted to improve the lot of others , has fought against injustice and a vote for her will send forth a ripple of hope that  political change is possible , that values do matter and that there is a mandate from the  people of Dublin Central for fairness , equality and justice.

8 February Comment from Maureen on the start week 2 of the campaign:

"Monday began with a North Inner City Drugs Task Force Prevention and Education meeting in relation to a seminar to be led by young people for young people from the area.  Then I handed in my nomination papers. I had the same conversation with the Returning Officer as I had for the bye-election - not allowed put in the word 'Independent'.  I could use the term 'Non Party' but I know Noel Gregory who nominated me would not be impressed.  Tony disliked the term 'Non Party' as it was negative!
R.T.E. wanted some video of me and the group so I organised the East Wall group with Fergus, Mel and Marie, so I think that will appear on the News tomorrow evening.

Then it was over to North Wall to canvass - a lovely bright day until a really heavy shower but I was given a present of a really big umbrella from the lady I was canvassing when the heavens opened. I headed to Smithfield as Philip Boucher Hayes was doing a piece on Dublin Central for Drivetime. As I was early I went around the area with my leaflet.  The radio piece, I felt, was a waste of my time - we were told to be there for 5.15, it was really cold.  Then, at 5.40, it started off quite civilised but degenerated into an 'argy-bargy' between some of the candidates - not my scene so I let them at it.  Who said politics was an honourable profession!

I continued canvassing - Kevin Barry House and around Lisburn, Lurgan, Linenhall - really great response; met some of Tony's street trader friends and met people I had been working with on issues on their behalf. 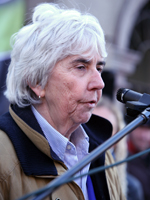 Maureen at the launch of the ICTU launch


The Irish Congress of Trade Unions has launched a support and advisory service to assist people affected by the Government decision to cut the Minimum Wage.

Maureen O'Sullivan and her group and suporters will launch her official election campaign at 4pm, Thursday , 10th February, in the Teacher's Club, Parnell Square west, Dublin 1